[edited April 17, 2020]  As most folks in the Classics world today are aware, Professor Dirk Obbink has been under a major cloud of suspicion for quite a while due — among other things —  to allegations that he illegally sold papyrus fragments from the Oxyrhynchus Collection to the Museum of the Bible (via Hobby Lobby). This is something I’ve tried blogging about repeatedly over the past six months but it’s an incredibly complicated tale. The current post is also being composed rather hastily because it is late in the day and I won’t be vertical for much longer (I’ll have to fill in a few references tomorrow). For quick background (and related details), see Brent Nongbri’s relevant tag at Variant Readings for the most complete coverage. In any event, today there has been a flurry of activity in my mailbox and on social media with the announcement that Dr Obbink had been arrested back in March and was released while further investigations were going on. The story was broken in the Oxford Blue newspaper by Lois Heslop, and shortly thereafter   was poached by the Guardian (which a few hours later did acknowledge the source). Both the Oxford Blue article and the Guardian piece are noteworthy as they repeat a denial by Dr Obbink made when allegations were first made last summer:

“I would never betray the trust of my colleagues and the values which I have sought to protect and uphold throughout my academic career in the way that has been alleged. I am aware that there are documents being used against me which I believe have been fabricated in a malicious attempt to harm my reputation and career.”

Although the Guardian version suggests Dr Obbink made such a statement to them directly, the statement can also be traced to the Waco Tribune-Herald (here, quoted via Variant Readings). As assorted (patient) people who have put up with emails from me are aware, I have long been suspicious of the documents which began this whole thing: a five-page document released by Mike Holmes in June 2019 just prior to an SBL panel devoted to the much-vaunted First Century Mark fragment (which turned out to be one of the P.Oxy. fragments in question). The documents (available via Variant Readings) are ostensibly a sales agreement between Dirk Obbink and the Museum of the Bible for four early Gospel fragments. The agreement is very odd, however, and while it did raise some initial questions (e.g. Brent Nongbri, Paul Barford, and probably others), it seems to have been forgotten how utterly suspicious the document itself was. While the original was a pdf, I’ll be commenting via screenshots of the document (you can download the pdf at the link mentioned above). 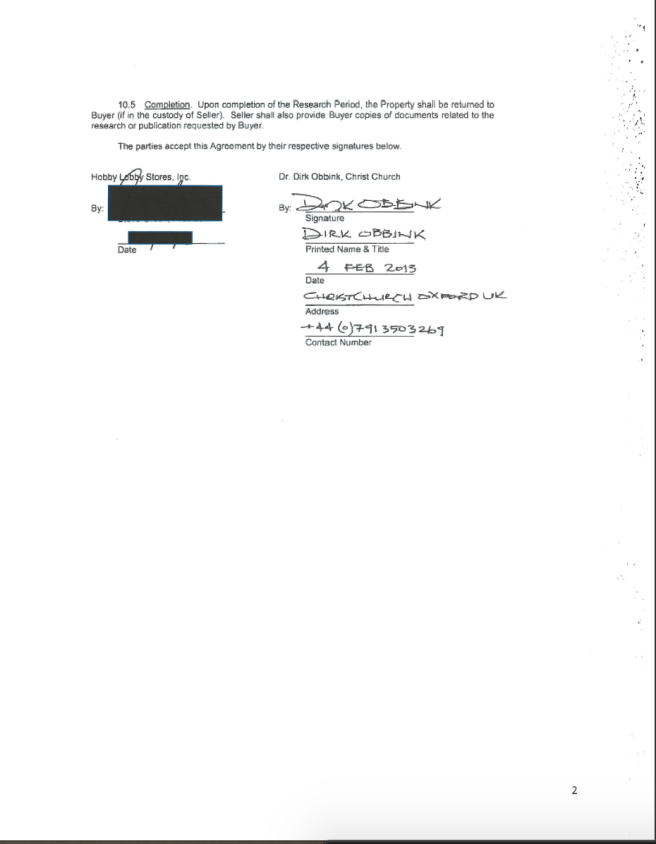 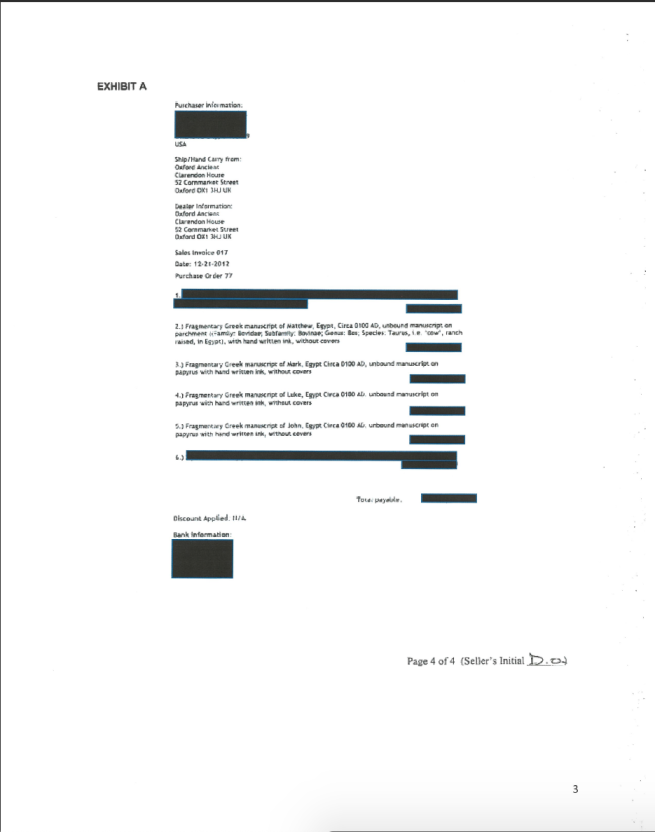 The final page of Mike Holmes’ document is a photo:

As can be seen, it is an odd document and as far as a contract of sale goes, it seems downright bizarre. The big giveaway is the pagination. What appears to have happened was that there was some contract with Dr Obbink (he has sold other items to the Museum of the Bible) and someone has done some hamfisted cutting and pasting along the way (it seems to be the sort of cutting and pasting one does with a photocopy machine) with some new page numbers added: i.e. page 1 of the contract has been excluded … possibly only a ‘title page’? Page two was photocopied with a new ‘background’ page to give it a page one. Page three was photocopied, but somehow the expected ‘page 3 of 4’ with initials has disappeared but there is page 2 on a ‘background’ page. We do have ‘page 4 of 4’ with initials and the subsidiary page 3. Clearly some ‘editing’ is going on, but by whom and for what purpose?

Given the apparent cutting and pasting, the document does raise major questions about whether the pages in question actually go together at all or whether they represent an amalgamation of other documents. The first page is pretty standard as mentioned, although a number of paragraphs are possibly missing. The second page does seem to be a logical continuation of the first, but the lack of a page number with initials suggests something isn’t quite right. The third page (Exhibit A), however, seems to be in a much different font (or size?) and may or may not actually be connected with the first two.

We seem to talk about transparency a lot when we mention the Museum of the Bible. In this case, their lack of transparency is casting a light on Dr Obbink. Perhaps the light is justified, but to be truly transparent, we need to know:

Dr Obbink has repeatedly stated documents had been fabricated. From what I’m seeing, they have … we’ll have to see where this goes.

3 thoughts on “Dirk Obbink and Stolen P.Oxy Allegations: Some Food for Thought”