Just yesterday I was muttering about not having enough time to blog but this story really needs some response because the media is getting it wrong and is (as of yesterday) possibly making it even worse. The initial story was in Hurriyet:

Turkish historian İlber Ortaylı has paid a visit to the excavation area in the southern province of Hatay’s İplik Pazarı district where an ancient mosaic reading “be cheerful, live your life” was discovered last week during the construction of a cable railway project.

Ortaylı said the mosaic was a very important and rare artifact, and a museum should be established at its excavation site to display the mosaic.

Speaking to press members in the excavation area, Ortaylı said Antakya, ancient Antiocheia, was home to lots of mosaics like this one, and continued:

“Many other big mosaics will be unearthed during excavations to be carried out in a row with the establishment of a new museum. Because senatorial families and rich people of the city lived here, they needed to prove their existence here. The patricians who lived in ancient Rome did not have to prove their existence with mosaic floors but people here had to. Many other artifacts will be found here. So this Mosaic Road Project is very important. This mosaic is highly important, too… In my opinion, it should be displayed in a new, separate museum.”

Hatay Metropolitan Mayor Lütfi Savaş said a museum would be built there to display the artifacts unearthed in the same site, and continued:

“The Mosaic Road Project started nearly three months ago. We have four cities that are rich in terms of mosaics. Hatay is one of them. We want to promote these four cities and create a destination [for tourism]. Not just with this mosaic but we have found many others in this area. We collected all of them and they are at the museum now. We are consulting experts while the museum is under construction. This mosaic and others will be displayed there.”

The mayor added that Italy also had a similar mosaic, “but it is an amateur one compared to ours.”
He said that they would also build an archaeology park and the project would be finished by March 2017.

Called the “skeleton mosaic,” the newly discovered mosaic belonged to the dining room of a house from the 3rd century.

According to Demet Kara, an archaeologist from the Hatay Archaeology Museum, two things were very important for the Roman’s elite class in terms of social activities: bath and dinner. In the first scene, a slave or servant starts a fire, symbolizing the bath. In the middle scene, there is a sundial and a young man running towards it with a bare-headed butler following him. The sundial is set between 9 p.m. and 10 p.m., 9 being the time when baths were usually taken and 10 being supper time in the Roman period. The writing at the scene states he is late for supper, with some thoughts about time. In the last scene, there is a skeleton with a drinking vessel in his hand along with bread and a wine pot, with the words, “be cheerful and live your life.”

The item was accompanied by this photo: 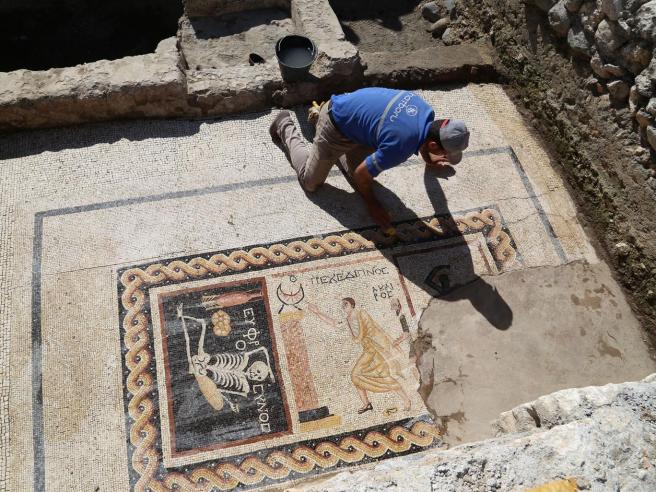 As might be expected when there’s some sort of ‘eat, drink, and be merry’ item from the ancient world, the press went all gaga, and there were several reiterations of the Hurriyet report, e.g.:

As I muttered on Twitter last week, the actual Greek doesn’t really support the interpretation that is being widely bruited about. And so I was all excited yesterday to read a headline on a piece in Hurriyet which was claiming the mosaic had been mistranslated … but then I wasn’t sure about that translation either:

A phrase written on an ancient mosaic found in the southern province of Hatay, which reportedly read “Be cheerful, live your life,” continues to pique the interest of experts, with writer and researcher Murat Bardakçı claiming the writing on the mosaic was wrongly interpreted.

“The mosaic says, ‘You get the pleasure of the food you eat hastily with death,’” wrote Bardakçı in daily Habertürk on April 27, while adding that it could be a quotation from one of the famous people in that era.

The writing on the centuries-old mosaic, which could be considered an ancient motivational meme, was reported to read “Be cheerful, live your life” in ancient Greek after it was discovered during excavation works in Hatay on April 22.

Demet Kara, an archaeologist from the Hatay Archaeology Museum, claimed the mosaic, which was called the “skeleton mosaic,” belonged to the dining room of a house from the 3rd century B.C., as new findings have been unearthed in the ancient city of Antiocheia.

Turkish historian İlber Ortaylı paid a visit to the excavation area and said the mosaic was a very important and rare artifact, and a museum should be established at its excavation site to display the mosaic.

I’m sure I’m not the only one puzzled by the idea of food ‘being hastily eaten with death’, but it’s possible we have lost something in the translation of the translation. Whatever the case, the mosaic panels have captions rather than specific quotations of sentiments.There aren’t really any sentences here; the words seem to me to be epithets of the figures presented (as is very often the case in mosaics with words in general).

Let’s actually look at what we have. If we focus on the panel of the mosaic which seems to be getting most of the attention (via the Daily Mail):

… most folks with Classical Greek will see the word (transliterated) EUPHROSYNOS, which means something like “happy” or “in good cheer”. So the skeleton is ‘in good cheer’ or perhaps is named ‘Happy guy’. What most of the English coverage seems to be ignoring is that this is part of a series of panels which are clearly meant to go together and the images and words on the second panel are significant as well. Here’s the image cropped from the second panel (from the Daily Mail):

When I was griping about the translation last week, I mentioned that I could not make out the words on this one. After staring at it for far too long, it is apparent that it says (transliterated) TRECHEDEIPNOS  with AKAIROS below it. The first word is interesting in that it is used of parasites (the human variety) running to a banquet (according to LSJ), with the idea of them being late. AKAIROS is something like ‘ill-timed’ or ‘pesky’. So we have a couple of parasites who are apparently dubbed ‘late-to-the-banquet’ and ‘pesky’ who are staring at a sundial (because they’re late of course) and are rushing to an extent that one has lost their shoe. The perils of having to depend on higher-ups for their next meal.

Sadly, the third panel isn’t preserved but the two surviving panels seem to be drawing a comparison between the happiness of the dead guy and the rushing around many folks who are alive have to do to stay alive (especially those who are dependent on others). The sentiment being expressed seems more akin to Solon’s warning to Croesus to count no man happy until they’re dead …

And just for some comparanda, here are the Italian examples the mayor was dubbing ‘amateur’ (Wikimedia Commons):

… who doesn’t seem to be a happy dead guy, but doesn’t have any closed captioning for the culturally impaired to tell us what is going through his head, so its up to interpretation whether his flagons are full or empty (maybe that’s the point). There’s also this one (another Wikimedia Commons pic): 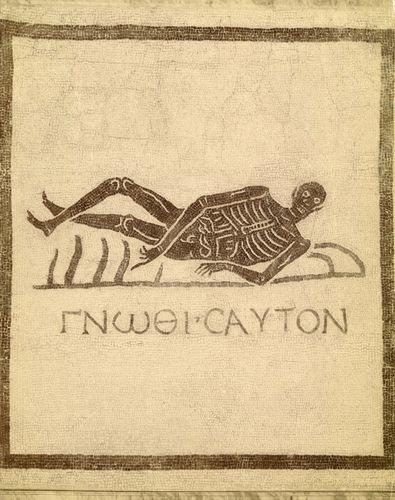 … with the ever-popular GNOTHI SEAUTON (know thyself) caption.  Whatever the case, both of the Italian examples seem to be expressing very different sentiments from the Hatay find, which, as mentioned, seems to be along the lines of  visually portraying the idea that ‘only the dead are happy’.

Tip o’ the pileus to Nikos Tsivikis  (@nikostsivikis ) who has also blogged on this and puts the sentiments expressed in the satirical tradition of Aliciphron (which seems bang on):

3 thoughts on “That ‘YOLO’ Mosaic from Hatay, Turkey … yeah … About That”