Continuing the annual series held at Newcastle, Reading, Cardiff and Exeter since 2000, the 2012 "Approaches to Ancient Medicine" conference will be held at the University of Cardiff on Monday and Tuesday 20-21 August 2012, hosted by the School of History, Archaeology and Religion.

If you are interested in giving a paper at the conference, please send an abstract of up to 200 words to Dr. Laurence Totelin (TotelinLM AT cardiff.ac.uk) by 20 February 2012 at the latest. Papers should be of 20 minutes duration. In addition to papers relating to the classical Greek and Roman period we welcome proposals relating to medicine in late antiquity, to the transmission of classical medicine including via the Syriac/Arabic traditions and to its reception at all periods up to the early modern.

It is hoped that the programme will be finalised in late March 2012.

The Paros Project 2012
Call for Students and Volunteers for research and study on the island of Paros, Greece

The Paros and Cyclades Institute of Archaeology offers students and other volunteers a class-and-field summer program in the Art and Civilization of Ancient Paros for two weeks in summer 2012. Volunteers must be 18 or older.

The island of Paros lies at the center of the Cyclades in the Aegean sea. The Paros Project is managed by The Paros and Cyclades Institute of Archaeology, a non-profit scientific institution registered under Greek law (Prof. Dora Katsonopoulou, President; www.helikeproject.gr, see Paros project).

The Paros Project will accept students and volunteers for a period of two weeks between June 18-29, 2012. The main focus of studies will be archaeological including courses on (a) the Archaeology of Paros from Prehistoric times to the Hellenistic Period (b) the ancient Art of Paros focusing on famous Parian sculptors of the Archaic through Hellenistic periods and Sculpture Workshops (c) the Civilization of the Archaic period and one of the most famous poets of ancient times, Archilochos of Paros. The program combines class teaching with visits to all important archaeological sites on the island including the famous ancient marble quarries and the Archaeological Museum in Paroikia, the modern capital of Paros.
The Paros Project will issue certificates of participation for students and volunteers on request.

Archaeology of Paros: From Prehistoric Times to the Hellenistic Age.
The course offers a survey of the archaeology of Paros from prehistoric times to the end of the Hellenistic period. With the help of primary sources (sites and monuments), students will be introduced to the ancient civilization of the Aegean and particularly the civilization of the most important of the Cycladic islands, the marble island of Paros. Teaching will be coordinated with visits to the ancient marble quarries, the ancient sites of Paros’ capital and environs, and the Mycenaean acropolis near Naoussa bay on the northeastern part of the island.
Instructor: Prof. Dora Katsonopoulou, The Paros and Cyclades Institute of Archaeology

Sculptors and Sculpture Workshops of Paros.
As well as producing the highest quality statuary marble in the Aegean, Paros was a leading producer and exporter of marble sculpture for much of the first millennium BC. This class will focus upon the spectacular collection of Parian sculpture in the Paroikia Museum, concentrating on its three most creative periods: the Archaic (ca. 600-500 BC), the Early and High Classical (ca. 480-400 BC), and the Late Classical and Early Hellenistic (ca. 350-200 BC). In addition to discussing the function, subject matter, style, and date of the sculptures, we shall pay particular attention to what the ancient Greeks called technê or facture: the intersection of material, technique, style, and skill-at-hand.
Instructor: Prof. Andrew Stewart, University of Berkeley

An introduction to the viper poet and hero of Paros, Archilochos.
An overview of the Archaic period in the Greek world, when Archilochos, the master of ‘blame poetry’ lived. The course will discuss representative specimens of his work, including the ‘Cologne Epode’ (the publication of which in 1974 scandalized many scholars) and the newly published ‘Telephos Elegy’ (2005), a mythological poem that bears telling comparison and contrast to epic narrative. One of the abiding concerns throughout the course will be the connections between traditional genre and personal experience. Students will be encouraged to consider the insistent ‘I’ in Archilochos’ poems, the powerful first person rooted in a local community and often at odds with it. A reading of the poems themselves, with close attention to the original, will be also be conducted in class.
Instructor: Prof. Ioannis (J.C.B.) Petropoulos, Democritean University of Thrace & Center for Hellenic Studies-Greece, Harvard University

COSTS. Each participant will contribute ¤650 per week for standard double occupancy or ¤800 per week for single occupancy. This donation to The Paros Project is tax-deductible and covers hotel room, two meals a day for a seven-day week, instruction costs plus miscellaneous Paros Project expenses. Payment will be accepted in advance or on arrival in Greece. Should the study season be canceled, the Project will refund the full contribution.

Police have found a statue of Aphrodite that has been missing for years and dates back to the third century B.C. in Kırşehir.

When Anti-Smuggling and Organized Crime Bureau teams stopped a car on the Ankara-Kayseri Highway on Wednesday to check the identity cards of the two passengers, H.Ş. and O.T., they found a statue that had been wrapped in a bag. According to police reports, the two suspects were allegedly trying to smuggle the statue out of the country. Police also found an unregistered pistol in the vehicle. The two suspects were detained.

Experts at the Ministry of Culture and Tourism discovered that the statue was the figure of Aphrodite, the daughter of Zeus and the goddess of love and beauty in Greek mythology. The priceless statue, which the experts also learned had been missing for many years, was taken to the Museum Directorate.

I’m going to include the photo that accompanied the piece … this is possibly the ugliest ‘Aphrodite’ I’ve seen in a long time … perhaps no one was really ‘missing’ it? Rather vague on the length of time it’s been ‘missing’ …: 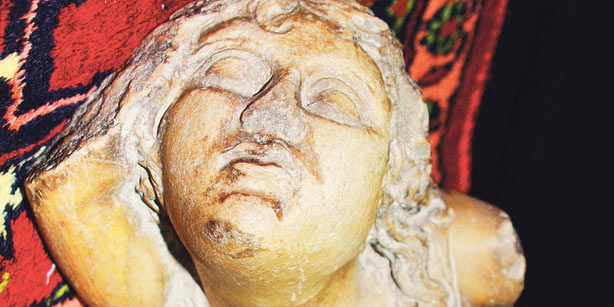 From ANSA comes a story that’s probably not surprising, given what’s going on in Italy:

The mayor of the Sicilian city of Agrigento said Thursday that he would not sell one of Italy’s prime archaeological treasures even for 40 billion euros after it reportedly attracted the interest of Russian industrialist Mikhail Prokhorov.

The precious-metals billionaire, who plans to run in this year’s presidential elections in Russia as an independent candidate, has set his sights on buying the ruins of the Temple of Zeus in Agrigento’s famed Valley of the Temples, according to media reports.

But Agrigento Mayor Marco Zambuto has moved to nip the notion in the bud.

”I wouldn’t sell the Temple of Zeus even for 40 billion euros, the figure Premier Mario Monti had to find to save Italy’s finances,” Zambuto said referring to the government’s austerity package, which was actually nearer to 30 billion.

”It’s simply unthinkable that a billionaire could buy our historical wonders and take them to their own country”.

Zambuto said, however, that the city was interested in attracting foreign investment in the UNESCO World Heritage site.

”It’s a different matter if we are talking about turning over management (of sites) for events or initiatives, or even the sponsorship of renovations and maintenance of the temples and sanctuaries in the valley,” he said. ”I don’t rule out this option”. The seven Doric temples at Agrigento, most of which probably date from the fifth century BC, are one of the glories of Magna Graecia, a swathe of southern Italy which was once dotted with wealthy and culturally lavish Greek cities.

The name Valley of the Temples is misleading as the site is located on a ridge on the edge of Agrigento.

”The history of the Valley of the Temples goes back thousands of years and the site is one of the few historic remains of Magna Graecia,” added Zambuto.

”If a private sponsor intends to finance a restoration, it’s welcome. Our door is always open to this type of proposal”

Hopefully some useful debate arises from this …