A GOLD ring and a gemstone found in a field near Upton Grey date back to Roman times, an inquest in Basingstoke heard.

The ring dates back to the third century, and the gemstone from the first or second century. They were found on January 18 last year by Martin Barker, a plumber and amateur treasure hunter from Middlesex, using a metal detector.

Sarah Whitby, deputy coroner for North East Hampshire, ruled at an inquest into the find, held at the Civic Offices, that the items were treasure.

They will now be valued by experts at the British Museum and are thought to be worth a few hundred pounds.

Ralph Jackson, curator at the British Museum’s department of prehistory and Europe, prepared a report for the inquest having studied the items.

The inquest was told he believes the carnelian gemstone bears a picture of a maenad – a female worshipper of Dionysus – the ancient Greek god of wine.

The gemstone would probably have sat inside the ring, which had a gold content of around 94 to 97 per cent, and the ring may have been part of a larger ornamental brooch, the inquest heard.

Angus Janaway, who owns the land on which the treasure was found, attended the inquest. He told The Gazette: “I have known Martin for a long time and this could be the find of a life time. When I first saw it, it was covered in mud so I did not know what it was.”

After valuation, the ring will be offered for sale to the Hampshire Museums Service. The money will then be shared between the Crown, Mr Barker and Mr Janaway.

Rob Webley, Finds Liaison Officer for the Hampshire Museums Service, said the items could together be worth around £300 to £500.

He said: “It’s a special piece and it is something that the museum service would hope to acquire. I would hope that it would go on display at the Willis Museum in Basingstoke.”

The incipit of a piece describing a discovery I’m very surprised we haven’t heard more about (this seems to be the only coverage!) … during highway construction, a number of burials — one of which apparently includes a Roman chariot — has been found near the Centocelle airport:

… not much detail after that, alas …

Here’s a photo from a slideshow in the Guardian: 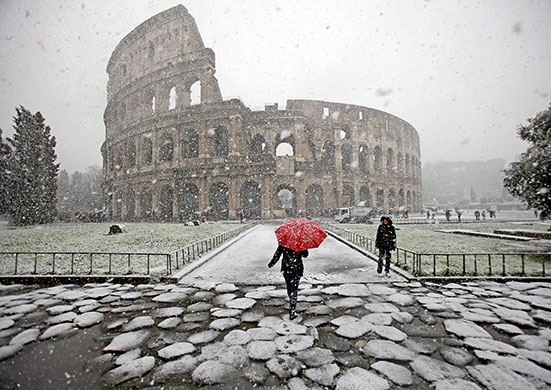 Came across this at the Internet Archive; it’s a pile (40+) volumes of this very interesting journal (in Italian, of course)… the ‘Read online’ option seems to be the best:

Seen on Aegeanet (please send any responses to the folks mentioned in the quoted text, not to rogueclassicism!):

The Archaeology Centre (University of Toronto) and the Royal Ontario Museum (ROM) present a full day of lectures by nine archaeologists from Ontario universities, each presenting an illustrated lecture on the results of his/her recent field work in the Aegean.

Sponsored by the Hellenic Republic and the Greek Communities of Canada