Not sure we mentioned this related item from back in October:

So I’m killing time waiting to go to the dentist by meandering through assorted auctions at Bonham’s in search of some items from Anthony Quinn’s collection … along the way, I find this item from the antiquities auction a week ago: 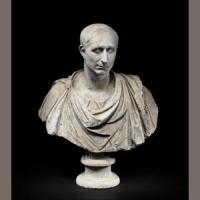 … which strikes me as bearing an uncanny resemblance to this guy, no?

In the second interview recorded in April at the Classical Association conference in Reading Dr Lisa Maurice of Bar Ilan University talks with CC’s Anastasia Bakogianni about her twin passions: children’s literature and the portrayal of Jews in films about antiquity.

In this vodcast she talks about the popularity of the classical world in children’s literature and its impact on how ancient Rome is perceived in the modern world. At this year’s CA there were two panels devoted to the subject, testifying to the vibrancy of research in this area. Lisa discusses how the portrayal of Romans in fiction for children and young adults has changed over time. In the 1950s the Romans were seen as the great civilizers, but more recently they have become the villains. In the second half of the interview Lisa talks about her work exploring what it means to be Jewish in ancient Rome with particular reference to two televisions series: Masada (1981) and Rome (2005-7). The shifting portrayal of Jewish and Roman identity on the small screen allows us to reflect on our own understanding of both ancient and modern and the on-going dialogue between the two.

This item from the Evening Standard (wow!) was mentioned over at Classics International:

Spears are being hurled in the classical world after a new book about Euripides was given a lukewarm write-up in the well-respected Classical Review.

Cypriot author  had spent eight years researching the play Rhesus, attributed to Euripides, for his new academic work published by the Oxford University Press. Liapis concludes that it’s not by Euripides but the authorship issue is not the problem. It was the review by Donna Zuckerberg, a little-known classicist doing a PhD at Princeton, who bakes by night and also happens to be the younger sister of Facebook founder Mark Zuckerberg.

Not many in the classical world share Zuckerberg’s opinion that Liapis “fails utterly” in writing a proper appreciation of the play, nor her view that he betrays “persistent and pervasive negativity”. The Classical Review has already received complaints about the quality of Zuckerberg’s review and dismissive comments. Another classical journal, the Bryn Mawr Classical Review, had given Liapis a rave write-up, saying he offered “ a wealth of intelligent, well-balanced discussion”.

Professor Colin Leach, formerly at Oxford University, whose enthusiastic review is due to be published in the Journal of Classical Teachers later this year, expressed his surprise that Classical Review did not allocate so important a book to a senior academic. He also notes: “Zuckerberg used the ‘word’ hapaces, which purports to be the plural of hapax. But hapax is not a noun, but an indeclinable adverb, meaning ‘once’, and hapaces does not exist. It may be a feeble joke, or even an Americanism.” God forbid.

If you don’t have access to Classical Review, you can get a taste of Zuckerberg’s comments here (it’s the first paragraph). The BMCR review by David Sansone is here. Simon Perris’ review for Classical Journal is generally positive. Judging from those (and the above), I strongly suspect the Standard was experiencing a bit of a slow news day and wanted to do some Zuckerberg bashing of some sort (perhaps they’re trying to stir something up analogous to Simcha Jacobovici v Joe Zias  … or Simcha Jacobovici v Yuval Goren  (but see also …) … disagreements of this sort aren’t really new to us and, as far as I’m aware, don’t generally make the newspapers. On the other hand, it’s interesting to note that Zuckerberg’s sister is pursuing a PhD in Classics!