One of the greatest benefits of an education in Classics is that it teaches you two very important skills which serve you well no matter what field you happen to go into post-degree: critical thinking and source criticism. They work hand-in-hand, of course, and it is increasingly apparent that such skills are often lacking when the press decides to cover the latest and greatest application of ‘science’ to our field. A case in point is the latest pressgasm currently making the rounds about how scientists have “proven” what date Sappho’s Midnight Poem was written. Sadly, the coverage was tainted from the press release stage with the result — since no one apparently felt the need to check sources — that calendrical precision is being claimed when none really exists.

Let’s begin with the press release from the University of Texas at Arlington:

Physicists and astronomers from The University of Texas at Arlington have used advanced astronomical software to accurately date lyric poet Sappho’s “Midnight Poem,” which describes the night sky over Greece more than 2,500 years ago.

The scientists described their research in the article “Seasonal dating of Sappho’s ‘Midnight Poem’ revisited,” published today in the Journal of Astronomical History and Heritage. Martin George, former president of the International Planetarium Society, now at the National Astronomical Research Institute of Thailand, also participated in the work.
“This is an example of where the scientific community can make a contribution to knowledge described in important ancient texts, “ said Manfred Cuntz, physics professor and lead author of the study. “Estimations had been made for the timing of this poem in the past, but we were able to scientifically confirm the season that corresponds to her specific descriptions of the night sky in the year 570 B.C.”

Sappho’s “Midnight Poem” describes a star cluster known as the Pleiades having set at around midnight, when supposedly observed by her from the Greek island of Lesbos.
The moon has set
And the Pleiades;
It is midnight,
The time is going by,
And I sleep alone.
(Henry Thornton Wharton, 1887:68)

Cuntz and co-author and astronomer Levent Gurdemir, director of the Planetarium at UTA, used advanced software called Starry Night version 7.3, to identify the earliest date that the Pleiades would have set at midnight or earlier in local time in 570 B.C. The Planetarium system Digistar 5 also allows creating the night sky of ancient Greece for Sappho’s place and time.

“Use of Planetarium software permits us to simulate the night sky more accurately on any date, past or future, at any location,“ said Gurdemir. ”This is an example of how we are opening up the Planetarium to research into disciplines beyond astronomy, including geosciences, biology, chemistry, art, literature, architecture, history and even medicine.”

The Starry Night software demonstrated that in 570 B.C., the Pleiades set at midnight on Jan. 25, which would be the earliest date that the poem could relate to. As the year progressed, the Pleiades set progressively earlier.

“The timing question is complex as at that time they did not have accurate mechanical clocks as we do, only perhaps water clocks” said Cuntz. “For that reason, we also identified the latest date on which the Pleiades would have been visible to Sappho from that location on different dates some time during the evening.”

The researchers also determined that the last date that the Pleiades would have been seen at the end of astronomical twilight – the moment when the sun’s altitude is -18 degrees and the sky is regarded as perfectly dark – was March 31.

“From there, we were able to accurately seasonally date this poem to mid-winter and early spring, scientifically confirming earlier estimations by other scholars,” Cuntz said.

Sappho was the leading female poet of her time and closely rivaled Homer. Her interest in astronomy was not restricted to the “Midnight Poem.” Other examples of her work make references to the sun, the moon, and planet Venus.

“Sappho should be considered an informal contributor to early Greek astronomy as well as to Greek society at large,” Cuntz added. “Not many ancient poets comment on astronomical observations as clearly as she does.”

Morteza Khaledi, dean of UTA’s College of Science, congratulated the researchers on their work, which forms part of UTA’s strategic focus on data-driven discovery within the Strategic Plan 2020: Bold Solutions | Global Impact.

“This research helps to break down the traditional silos between science and the liberal arts, by using high-precision technology to accurately date ancient poetry,” Khaledi said. ”It also demonstrates that the Planetarium’s reach can go way beyond astronomy into multiple fields of research.” […]

The article goes on to give a bit of info on the authors of the study. As is often the case, the press release was picked up verbatim by the major science news sites:

Other news outlets rewrote it, but the quote which seems to consistently survive intact is the third paragraph:

“This is an example of where the scientific community can make a contribution to knowledge described in important ancient texts, “ said Manfred Cuntz, physics professor and lead author of the study. “Estimations had been made for the timing of this poem in the past, but we were able to scientifically confirm the season that corresponds to her specific descriptions of the night sky in the year 570 B.C.”

So the impression we’re given is that these scientists ran all sorts of computer simulations with the result that  the poem can be precisely dated to a particular season in a particular year.  Indeed, some news outlets take this to another extreme; the Independent, e.g., inter alia suggest:

While it’s impressive to figure out the date the poem was written, the team’s discovery sheds more light on Sappho herself. Little is known about her life or the years between which she lived, but this latest investigation proves she was still producing poems in 570BC.

Thanks to a team of researchers from the University of Texas at Arlington, we now know for certain that she was alive until at least 570 BCE.

Smithsonian puts another spin on it:

According to Michelle Starr at CNET, the researchers used software called Starry Night (version 7.3) and Digistar 5 from the International Planetarium Society to recreate the night sky as seen from the Greek island of Lesbos. They chose to start with the year 570 B.C., the year Sappho died and the only reliable date associated with her.

… which we’ll actually take as our secondary point of departure. It’s worth noting that the Starr article mentioned by the Smithsonian is the same one cited immediately above it and, in fact, does not mention why they authors chose the 570 BCE date — indeed, if it did, a dangerous circularity is obvious.

The 570 date is interesting, though, as it is the date which is usually given as the possible year of death for Sappho. Emphasis on possible — we really do not know when she died and as most Classicists will tell you, even tales of her leaping off a cliff in the aftermath of an episode of unrequited love were doubted in antiquity. In other words, 570 BCE is hardly a reliable date.

Perhaps further condemning the journalists in this one, none of them seem to have bothered to go look up the journal article, which is freely available on the web right now:

It starts off well enough, with the original Greek and a number of translations (most rather dated) … here’s a ‘screenshot quote’:

Of particular importance is a paragraph which outlines the assumptions on which the study is based: 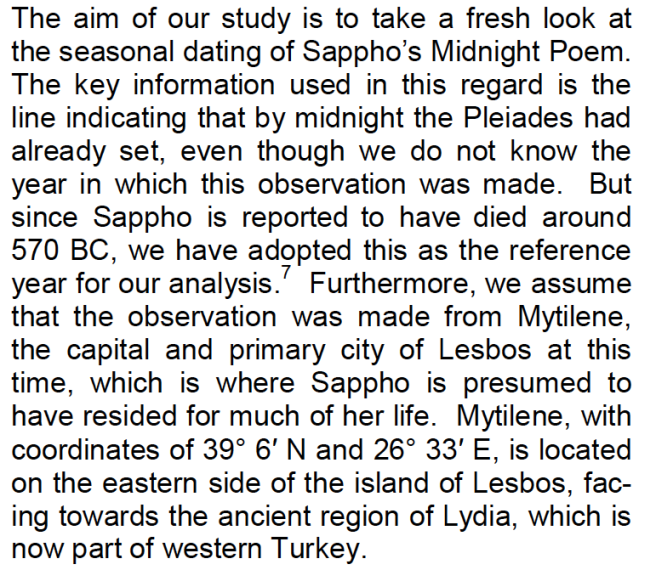 So the 570 date is one of convenience. Still … that footnote:

Well yes it does, because in theory, this means the poem may have been written as early as 590 BCE or as late as 550 BCE, or perhaps they mean as early as 610 BCE with 570 still being the ‘end date’. In other words, this study cannot be used to establish firmly that she was still writing in 570 (as many journalists seem to think), nor can it really be used to establish that she actually died in 570. It’s an arbitrary date that was chosen to plug into the computer simulation. If we believe that date, then the season of writing possibly follows. I have no idea what ‘appreciably’ would mean to the authors of the study.

That said, another thing that bothered me about all this is that Sappho’s poem clearly gives another astronomical marker, namely, that the “moon had set”. Why wasn’t this worked into the study? The authors include this puzzling statement:

I don’t understand this at all. Is the software not sophisticated enough to track both the visibility of Pleiades AND the visibilty of the moon on the same day (er … night)? We know they made adjustments to account for the precession of the equinoxes  (p. 20);  could not the simulation have been run for a series of years to see when both conditions were met? If that were done we possibly could get a more scientifically precise (and useful) date or at least some possible dates. I don’t get it.

Whatever the case, the actual thing we should be getting out of this story is only that if we believe Sappho happened to still be writing in 570 and hadn’t yet met her demise, she was probably writing in the first quarter of the year. The ‘scientific precision’ we are being led to believe by journalists simply isn’t there.