Αrchaeologists from the 28th Ephorate of Antiquities unearthed a tomb in the city of Amphipolis, near Serres, northern Greece, which they believe could belong to the wife and son of Alexander the Great, Roxane and Alexander IV.

The circular precinct is three meters, or nearly 10 feet high and its perimeter is about 500 metes, or 1,640 feet surrounding the tomb located in an urban area close to the small city of Amphipolis. The head of the team, Katerina Peristeri noted that it is too soon to talk with certainty about the identities of the discovery.

“Of course this precinct is one we have never seen before, neither in Vergina nor anywhere else in Greece. There is no doubt about this. However, any further associations with historic figures or presumptions cannot be yet made because of the severe lack of evidence and finances that will not allow to continue the excavations at least for the time being,” she added.

The area has since 1965 been known as Kasta Tom, but these are the first excavations to take place there. The project began without any secured funds, which resulted in only parts of the impressive site coming to light. Analysts suggested that conclusions about the owners of the tomb cannot be drawn without first unearthing the tombs and discovering evidence about their identities.

Nevertheless, local authorities and media rushed into claiming and believing that the tomb belongs to Alexander’s wife and son, who, according to legend, had been ostracized to Macedonia after Alexander’s death. There the 12-year-old Alexander the IV and his mother Roxane were murdered. Tradition has it that the two victims were buried in Amphipolis but no evidence so far has proved this.

Nice to see some skepticism from the folks at Greek Reporter … at this point, we probably have as much evidence that this is the tomb of Roxane as it is the tomb of Xena …

UPDATE (a few minutes later): further adding to the suspicion, it is clear that this excavation started back in 2010 with the express purpose of finding the tomb of Roxane … see the post at Challenging the Past (Looking for the tomb of Roxane) and follow the link to the Greek news item: Ανασκαφές στην Αμφίπολη)

From the English edition of the Gazzetta del Sud:

Two ancient Roman shipwrecks, complete with their cargo, have been discovered by Italian archaeologists off the coast of Turkey near the the ancient Roman city of Elaiussa Sebaste. The ships, one dating from the Roman Imperial period and the other from about the sixth century AD, have been found with cargoes of amphorae and marble, say researchers from the Italian Archaeological Mission of Rome’s University La Sapienza. Both ships were discovered near Elaiussa Sebaste, on the Aegean coast of Turkey near Mersin, according to a statement issued by the Italian embassy in Ankara. Officials say the discoveries – led by Italian archaeologist Eugenia Equini Schneider – confirm the important role Elaiussa Sebaste played within the main sea routes between Syria, Egypt, and the Anatolian peninsula from the days of Augustus until the early Byzantine period. Elaiussa, meaning olive, was founded in the 2nd century BC on a tiny island attached to the mainland by a narrow isthmus in the Mediterranean Sea. Schneider has been leading the excavations since 1995.

There were other finds (not underwater) earlier in the month: Roman Bath From Elaissua Sebaste

… which I doubt has been published: 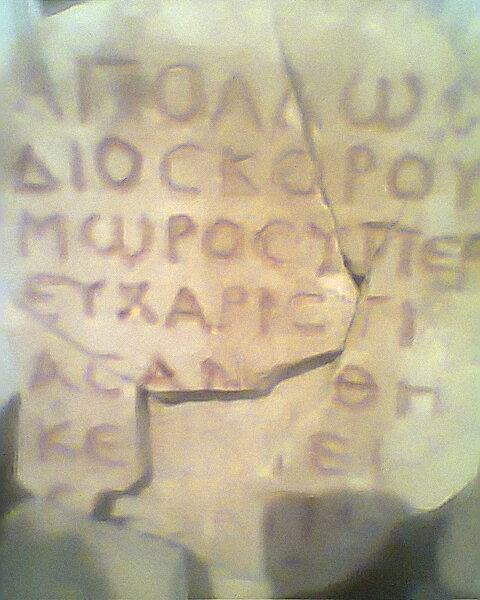 The ‘regular’ obituary in anticipation of something more formal later:

Ron Janoff brought this very interesting turn-of-the-previous-century newsletter to my attention … it languishes in Google books, but Dr Janoff is sending them out on a regular basis to those who drop him a line. They’re rather interesting and very tongue-in-cheek. The first one is sort of the mission statement of the publication, which includes this little tidbit:

The second issue’s focus is a somewhat tongue-in-cheek review of a Latin teacher, which includes this excerpt (in medias res, obviously):

At least as entertaining as the columns are the accompanying advertisements from the time … besides the usual booksellers and the like that one would expect, the editors clearly have done some legwork to get revenues to fund this little publication. One which caught my eye:

It’s interesting how they carefully separate the hours when men and women might attend; it’s probably similar to how Roman baths operated at various times in their history. In any event, if you’d like to be added to the distribution list, contact Dr Janoff at chiron.nyc AT gmail.com